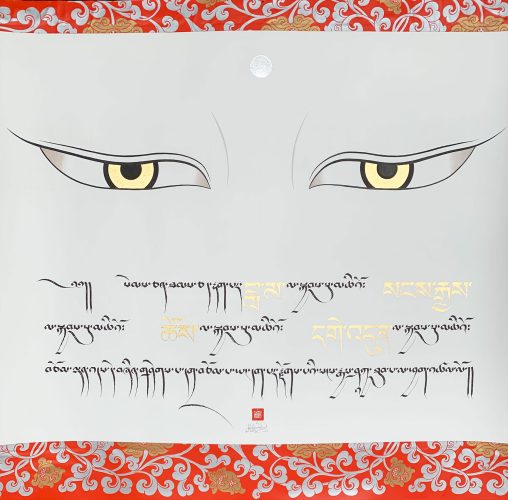 The compassionate yet insightful gaze of Lord Buddha is attractive to most as being both compelling and calming.

It is said that the proportions of a Buddha image with all its features and marks that make Buddha instantly recognisable, where taught by Buddha himself.
So we can say that such proportions and guidelines are sacred – as they come directly from an enlightened state of mind.

There are 32 main and 80 secondary marks that describe the features of a Buddha, such as the ūrṇā coil that emits light between the eyebrows, illustrated here in white gold.

It is certainly true that with the development of Buddhism and its iconography, particular traditions and styles developed within the different realms of Dharma, indeed Tibet and Nepal is no acceptation, holding rich and definite lineages of Thangka painting and statue making, which has further developed through its realised saints and artists – who had the divine ability to communicate between heaven and earth. 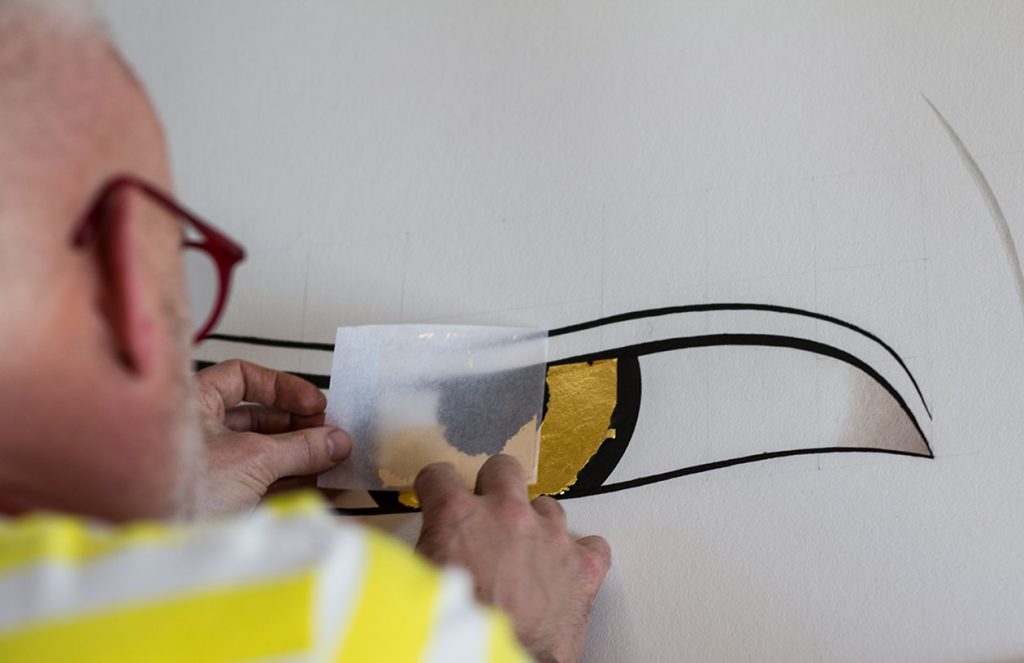 This artwork demonstrates the Tibetan style of Buddha’s eyes, indicating the typical grid proportions from which the eyes are formed, illustrating just part of a much more complex sets of proportions for the whole face and body.

The below calligraphy is a revived ‘egg based’ Drutsa style from the 14th century Tibet, with keywords on Lama, Buddha, Dharma and Sangha in gilded Uchen script. This four fold refuge prayer and finished with a homage prayer to the historical Buddha Sakyamuni.

Exhibited as a scroll, with added top and bottom, is an old remnant of silk-screen printed gold and silver floral pattern on red. Similar to Chinese brocade, the pattern was originally designed by Tibetan Art Master Sherab Palden Beru as part of the traditional decoration at the Samye Ling Temple in Scotland, under which Tashi apprenticed and hand printed this and other such designs.

In this below video from ‘Study Buddhism’ – Tashi talks through the meaning of the Buddha’s eyes and Tibetan calligraphy in this large art piece.

Issued with this artwork is a Certificate of Authentication with description, which serves as provenance, as well as a recipe of value for insurance purposes.