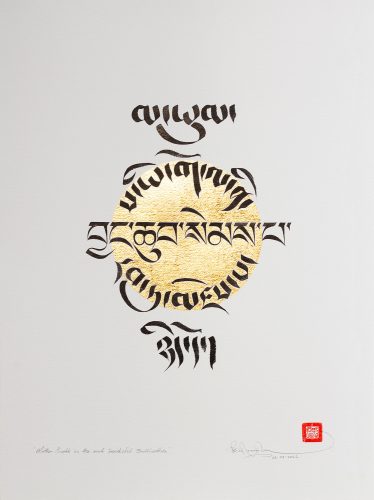 View basket “Mother Earth is the most beautiful Bodhisattva – landscape” has been added to your basket.
Add to WishlistAlready In Wishlist
Add to Wishlist

Mother Earth is the most beautiful Bodhisattva – portrait

Mother Earth is the most beautiful Bodhisattva – portrait

This pieces was created as a tribute the great Zen master Thich Nhat Hanh, who passed away 22nd January 2022 at the age of 95.

Famous as a spiritual leader and activist, revered around the world for his pioneering teachings on mindfulness global ethics and peace. He was also a poet as well as an accomplished calligraphy artist.

Thich Nhat Hanh originally created the quote as an English calligraphy – “Mother Earth is the most beautiful Bodhisattva” a poignant quote on more than one level, the inspiration of this calligraphy piece translated in Tibetan:

Translating the quote was not straightforward, made possible with the generous expertise of Lotsawa Lowell Cook.

Surprisingly, it was the term Mother Earth which presented the translation challenge. An alternative འཛིན་མ་ perhaps less understood, meaning the earth that holds/supports us.
It was agreed མ་ཡུམ་ was more suited, given this translation of Mother as a more elevated status, and interestingly, the five elements (which of course make up the earth) are considered the Five Female Buddhas ཡུམ་ལྔ་, with ས་ཡི་གོ་ལ་ translating as earth – the celestial sphere (planet), suggested here in pure gold leaf.

The majority of this calligraphy is created in a cursive Umé script, with a shortened translation of Bodhisattva (པ་) used to balance the overall composition, created honorifically in the classic and more formal Uchen script.

Issued with this artwork is a Certificate of Authentication with description, which serves as provenance, as well as a recipe of value for insurance purposes.